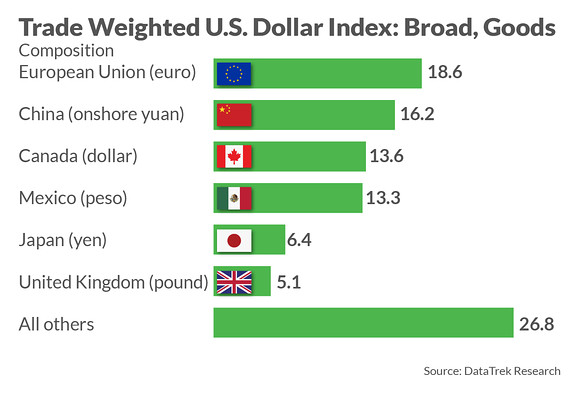 With so many conflicting signals about markets, the economy in the U.S. and abroad, the impact of the China-U.S. trade war, and more, what’s an investor to think?

Through all the noise, there’s one measure that bears watching. Even investors who don’t trade currencies should pay attention to the strength of the U.S. dollar, according to a note out Monday. That’s because while the strong dollar has a lot of effects, its cause, at least right now, is that investors around the world are skittish.

Normally when the greenback gets this strong, something gives, and other currencies start to strengthen, observed Nicholas Colas, co-founder of DataTrek Research. “If they don’t, it means something is very different this time around. And ‘different’ in this case probably doesn’t mean ‘good’ when it comes to investor risk appetites,” he said.

The currency measure Colas prefers is called the Trade Weighted U.S. Dollar Index: Broad, Goods, and it’s hovering around all-time highs — although data only goes back to the mid-1990s. The index tracks how well America’s currency is performing against currencies for other countries with whom the U.S. has a trading relationship.

The question of what, exactly, it means for a currency to “perform against” others is important, and anyone who pays attention to President Donald Trump’s Twitter tirades about the dollar has a sense of both its significance and its ambiguity.

Fact check: true. It does make it harder for American companies that export to remain profitable when the currency is higher. But focusing only on manufacturers misses a lot of the bigger context, as well as why things are so complicated right now for the dollar.

“Super-cap tech stocks — important market leaders for U.S. equity markets — have the greatest financial exposure to non-dollar revenues of any S&P group,” Colas noted. “At 57% non-domestic revenues, Tech companies face a strong currency headwind just now.” Other sectors that have a higher-than-average exposure to the dollar include materials, consumer staples and energy.